in: C++ on Embedded, ExecutionPlatform

Most C and C++ developers are familiar with the term undefined behaviour. Here, the standards allow the compiler some freedom in terms of interpretation. But the fact that this can quickly lead to very subtle deviations in off-target behaviour is not as well known.

There are a total of three different categories of freedoms, which are granted by the C++ standard compliant compilers. First of all, we will get a brief overview, based on the definitions from the current C++17 standard. By the way, the C18 standard defines the terms in the same way.

Unspecified behaviour refers to the correct programmes that use language resources in an unspecified manner. In this case, the compiler can decide on the behaviour to be used. Unlike undefinied behaviour however, the possible behaviours are transparent and understandable.

Surprisingly, one of the core aspects of the language is undefined, namely the order of execution of expressions.

Here, one function foo is called up with two parameters. Each parameter is a return value of two other functions.

For such printouts, the standard does not define whether fun1 or fun2 will be executed first and, as a matter of fact, different compilers use both variants here. The following short example illustrates the order of the evaluation.

The output on a typical desktop compiler (an x86-64 with gcc 9.2) produces the following result:

The same code, with a typical embedded compiler (an arm-gcc-none-eabi 8-2018-q4) executed on an ARM Cortex-M:

The execution order of the embedded compiler is therefore in reverse, compared to the desktop compiler.

This example simply produces a different output. Both functions always produce 0. However, it is easy to imagine the effects that occur when fun1 and fun2 access the same data and evaluate and change it.

To the best of my knowledge, there is currently no compact list for unspecified behaviour. Fortunately, this does not apply to another category of compiler-dependent behaviour.

Implementation-dependent behaviour differs from unspecific behaviour in one important aspect: here, the manufacturer of the compiler must document what behaviour it uses. This means, in particular, that the behaviour for this type of compiler remains identical across different cases.

The C++ Standard itself has a list of all positions that are subject to such documentation requirements. However, with 235 different items, this list is relatively extensive.

Some of the points appear plausible right away:
The alignment of datatypes must of course be dependent on the target architecture. If the hardware only supports 4-byte integers at 4-byte addresses (0x00, 0x04, 0x08, …), the compiler must take this into account. A standard definition of such characteristics across many hardware architectures, in a way that makes sense, is simply not possible. Platform independence is one of the great unique selling points of C and C++.
Therefore, the best option is to define such aspects as implementation-dependent.

The other items on the list do not seem to have such a strong justification. In any case, to me, it does not seem immediately clear, why the value of ZERO should be implementation-dependent.

Example: The type of enums

The standard tells us that

If you want to see how this can cause practical bugs, see our investigation about a bug in ARM Mbed. The bug we found is caused by the changing underlying type of an enum. 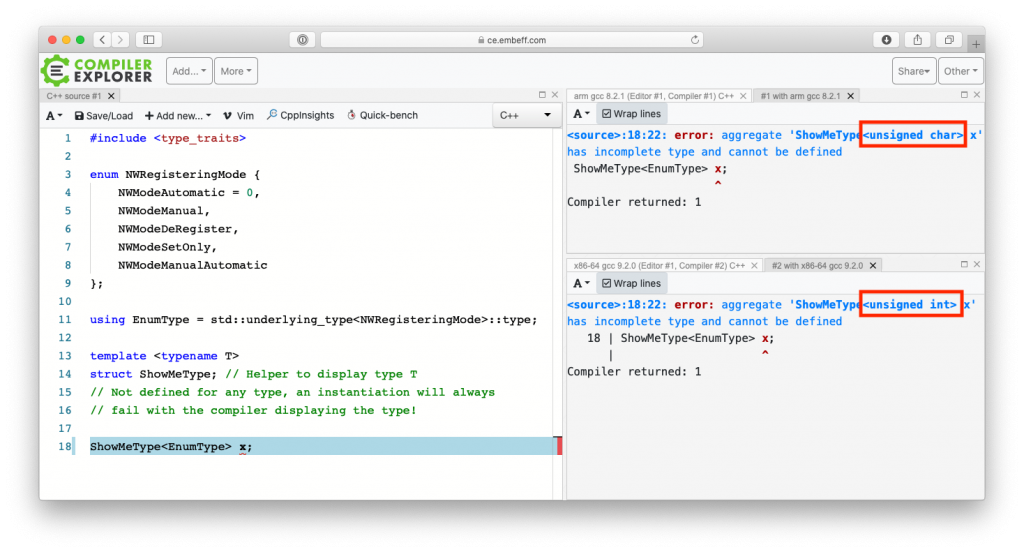 As you see in the picture, one compiler chose unsigned char, the other unsigned int for the same enum. Depending on what you are doing with the enum values (consider bit-operations); the calculations may yield different results for different underlying types.

Renders the entire program meaningless if certain rules of the language are violated.

If you (unconsciously) violate the rules of the language, the entire program could be interpreted as nonsensical by the compiler. The following example shows the dangers that lurk in such situations.

Access to uninitialized variables violates the rules of the language, and is therefore undefined. What does the compiler do in this case? A glance into the assembly that is generated is very enlightening here. 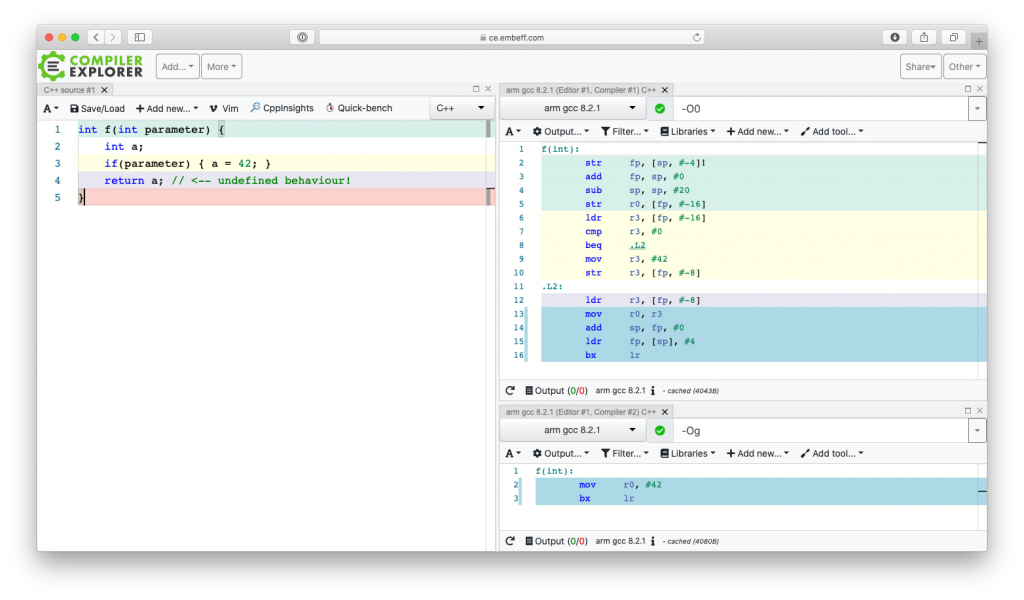 So, the code exhibits a completely different behaviour, depending on the optimization level. Since the variable access is undefined behaviour, this interpretation is permissible.

Unspecified, implementation-dependent and undefined behaviour are important aspects of C and C++. Compilers are given degrees of freedom and allowed room for interpretation, according to the respective standard.

It is therefore always necessary to test code with the compiler that is used for the final product, using the same settings. This generally also requires on-target execution on the actual target system. Otherwise, you could encounter hidden risks and a security that is purely perceived.